John Campbell Greenway was a man of unique engineering ability, managerial talent,  perseverance, and a solid reputation for completing tough jobs. A mining, steel, and  railroad executive, Greenway also had a distinguished career as a soldier.​

Born in Huntsville, Alabama in 1872, Greenway graduated from Yale University with a PhB in engineering and was a celebrated athlete. His early mining employment was cut short when he joined Roosevelt's Rough Riders in the Spanish-American War and earned a Silver Star for courageous service at the Battle of San Juan Hill. After the war, Greenway resumed his mining career with U.S. Steel Corporation, where he led the development of the Western Mesabi Iron Ore Range in Minnesota. Asked to move to Bisbee, Arizona in 1910, he became General Manager of the Calumet & Arizona Copper Company. He was later named General Manager of New Cornelia Copper Company (NCCC) and the Cornelia & Gila Bend Railway.​

It was at NCCC where Greenway reached the pinnacle of his career. Copper mineralization at Ajo was remote, had no water, and the low grade copper deposit was resistant to conventional processing methods. Greenway led NCCC in taking on the Ajo challenge. He led the development of the Ajo town site. For water, he found an ancient lava flow which he tapped into using a large oil rig. Man-made caverns housed the pumps and a pipeline brought the water across miles of desert into town.​

Ore processing was the next challenge. Greenway and Dr. L. D. Ricketts developed, demonstrated, and patented a new process. Leaching ores with dilute sulfuric acid in lead-lined vats followed by electrowinning copper directly from solution yielded cathode-grade copper which converted the recalcitrant Ajo mineralization into a lucrative mining venture. The railroad company began operation that same year, efficiently connecting mine to market. Between 1918 and 1957, NCCC and its successor Phelps Dodge shipped over 3 billion pounds of copper from the facility.​ 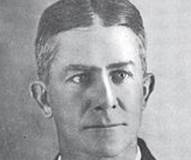